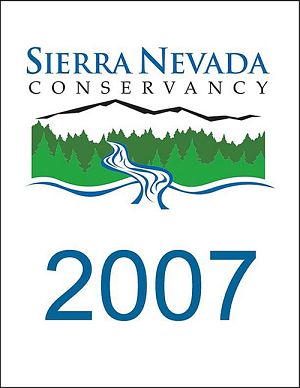 Project Description: On September 22, 2004, Governor Arnold Schwarzenegger signed historic legislation creating the Sierra Nevada Conservancy (SNC), the largest conservancy in the state. By 2007, with funding provided by Proposition 84 as passed by California voters in 2006, the SNC was ready to embark on an ambitious grant-award program. MLTPA was ready. The Foundation submitted a grant application that fall for $120,099 to fund project coordination, public outreach, and data collection and development efforts as part of CAMP, the Concept and Master Planning process MLTPA had initiated with its Planning Proposal earlier in the year. The SNC Board of Directors voted to award MLTPA the full amount on December 6, 2007. This was the SNC's first award to any applicant in Mammoth Lakes, and until its suspension in December 2008 this grant played a key role in the success of the CAMP process.

PHOTOS: In October 2008, the Sierra Business Council and the Sierra Nevada Conservancy hosted "Sierra Solutions" at Mammoth Mountain Ski Area's Mountainside Conference Center, a conference intended to build "healthy communities, prosperous economies, and environmental quality." While on site, SNC staff and members of its Board of Directors toured SNC-funded projects in Mammoth Lakes. Check out some photos from the tour.

PRESS: Check out Ted Carleton's editorial in The Sheet!